Come pay tribute with us to one of the most influential and innovative musicians of the 20th century, Miles Davis: American jazz trumpeter, bandleader, and composer. Experience the music that sold-out concerts worldwide and crossed five decades of major stylistic developments in jazz earning Davis a 2006 induction into the Rock and Roll Hall of Fame. The CenterState Bank Concert Under the Stars series is a co-production of Lake Wales Arts Council and Bok Tower Gardens.

Originally from Harrisburg, Pennsylvania, James Suggs began playing the trumpet at nine years of age. At fifteen, he started playing professionally with jazz groups in the Northeast Ohio area and occupied the first chair position in the Canton Youth Symphony. During high school, he studied privately with jazz and classical professors, most notably with Jack Schantz and Scott Johnston. He also attended Akron University’s Summer Brass Camp on a full scholarship.

At sixteen years of age, James was selected to tour with THE CONTINENTAL SINGERS which gave him the opportunity to play for audiences in Switzerland, Holland, Germany, and throughout the United States. In 2005 he was hired as the trumpet soloist in the world-famous Glenn Miller Orchestra under the direction of Larry O’Brien, touring throughout the United States and recording their latest CD, “Steppin’ Out.” A year later he performed as the soloist with another legendary big band under the direction of Buddy Morrow, The Tommy Dorsey Orchestra.

James began an extensive experience in Buenos Aires, Argentina in November of 2005 after being invited by a musician friend. In those eight years, he played professionally, learned to speak Spanish proficiently, taught private lessons to many students, and toured all over the world with Argentine bands, one being LOS PERICOS, with whom he was the only trumpet player. The band performed for massive audiences in cities like Lisbon, London, Milan, Barcelona, Madrid, Caracas, San Francisco, Chicago, and New York to name a few.

He has performed for audiences in notable venues such as The House of Blues in Orlando, FL., B.B. King’s in New York City, Yoshi’s in San Francisco, The Howard Theatre in Washington D.C., Thelonious in Buenos Aires, Argentina, and at Ronnie Scott’s and The Clapham Grand both in London, England.

Paul Gavin is a Drummer, Teacher, Composer & Arranger in Tampa, FL. Since graduating from the University of South Florida in 2015 Paul has made his living exclusively as a freelance musician. By playing all kinds of music all around the state of Florida, teaching privately and in schools, and writing for school programs and his own original music he maintains an active schedule.

After almost 4 years of supporting others’ musical projects, Paul is now focusing on building his own and currently has two bands. The Vanguard plays his original music, and Mosaic plays the music of Art Blakey & The Jazz Messengers.

Tribute to Miles Davis ticket price includes general admission to the Gardens. All ticket holders will receive a concert wristband at the entrance gate and this wristband must be visible at all times. The Entrance Gate will close at 8:00 p.m. and late arrivals will not be admitted. Purchasing in advance is recommended as the capacity is limited to 600 tickets and the gate will close if the capacity is reached. 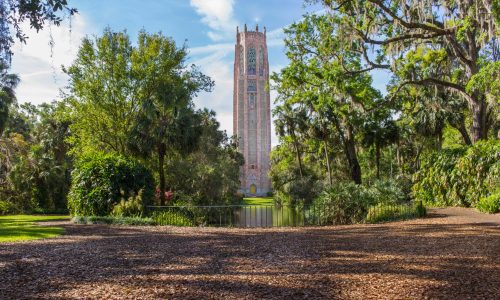 Reverend Barry & the Funk performs during Bok Tower Gardens' Concert Under the Stars: Groove that Makes Yo' Booty Move.