Historic Polk Theatre was built in 1928 and features an annual live performing arts series as well as independent films and special events.

Watch a movie, Broadway performance, or listen to a live concert at this historic vaudeville/movie palace during your Central Florida vacation. The King, Elvis Presley, once played there.

Upon approaching the Polk Theatre, it seems fairly standard, aside from its iconic marquee sign that has made its way onto the Instagram feeds and Pinterest boards of the masses. But the moment you walk into the building from the bustling streets of downtown Lakeland, you’ll understand that the Polk Theatre isn’t your standard theatre.

“Italian-born architect, J.E. Casale, designed the Polk Theatre to be a 2,000+ seat vaudeville/movie palace, which mimicked a Mediterranean village,” according to ScottyMoore.net. “The stage is flanked by Italianate walls with niches, sconces, and even faux balconies and windows. An ornately tiled staircase leads to the mezzanine lobby, where towering columns, intricate cornice and molding work, and brass banded terrazzo floors awe patrons.”

The breathtaking splendor of Casale’s architecture resides under one of the theatre’s most fascinating design aspects: a deep blue ceiling full of twinkling stars, which can also be lit to simulate a sunrise/sunset. Even when you visit the theatre in broad daylight, it can difficult to convince your mind that you aren’t experience an evening in Italy – trust us, it’s that beautiful.

On August 6, 1956, Elvis Presley performed at the Polk Theatre for hordes of young fans. Reports reveal that patrons began lining up for his three scheduled evening performances as early as 9:00 a.m., and that one female fan even fainted from the heat! Elvis apparently put on quite the show for his dedicated fans.

While there are no remnants of his entertaining performance, Elvis Presley did leave behind his signature on the wall of the theatre’s third floor dressing room. The signature has since been removed from the wall to avoid water damage from a flood, but is now framed and will soon be displayed in the theatre once again.

You too can experience this unique venue during your Central Florida vacation as the Polk Theatre hosts film showings, Friday – Sunday. Enjoy independent films, classic films, foreign films and timeless films for the entire family. Be sure to check their Calendar of Events when you’re in town. Tickets range from $4.00 – $7.00, and beer and wine are sold at the concession stand.

I went to this theater as a child. It is as elegant now as it was then. The group responsible for its preservation has done a marvelous job. The night we attended, the movie was preceded by live...

I went to the Polk when I was much younger as it was a movie theater. It was a treat. Now, my husband and I have date nights there when they have movies. The architecture and history of the... 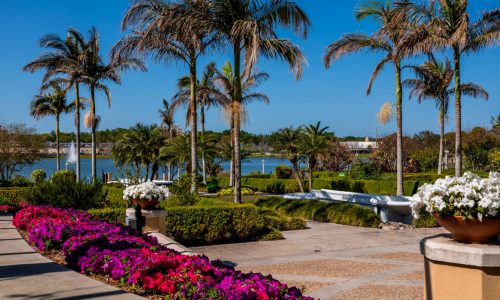 Located along the Frances Langford Promenade at Lake Mirror, this botanical display garden set in a neo-classical architectural environment is…