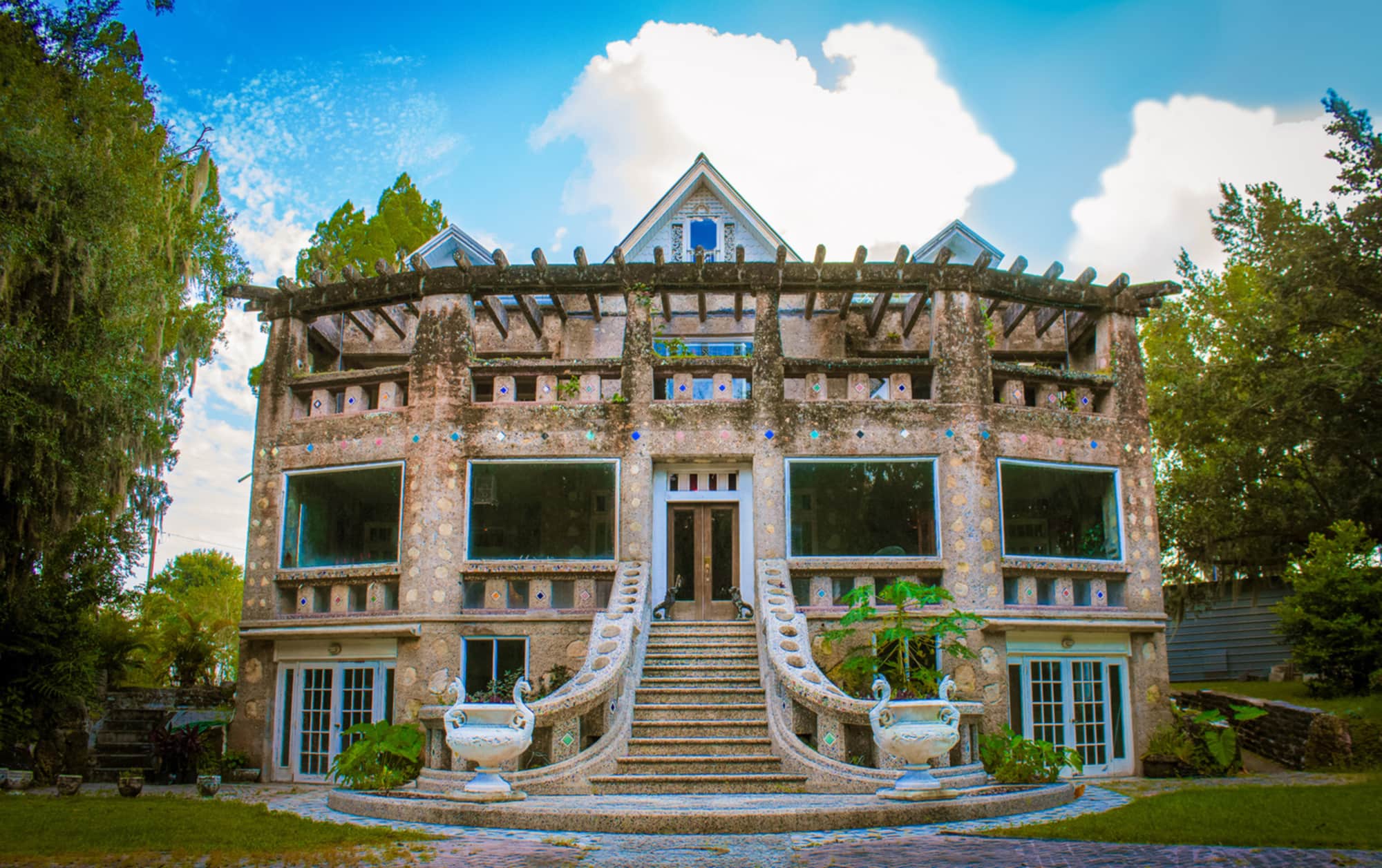 The rebuilding and remodeling of the Wonder House was covered by episode 9 of the Netflix show Amazing Interiors. Owners of the private residence offer historic tours Friday – Sunday.

Before Cypress Gardens and Walt Disney World Resort, tourists flocked to this one-of-a-kind mansion in the heart of Central Florida.

With its concrete walls inlaid with glass tile mosaics, it’s no surprise the unique homestead, known as the Wonder House, quickly became a popular tourist destination from the 1930s – 1960s.

Conrad Schuck was born in 1877 in Pittsburgh, PA, where he became a successful building contractor and stone quarry dealer. Upon doctors telling him he had only one year to live, Schuck packed up his family, and started to build his dream home in sunny Central Florida.

Construction of the Wonder House began in 1926. When Schuck started the excavation for the house, he found that he was digging into bedrock. An inventive architect, and stone dealer by trade, he decided to use the rocks to his advantage.  Schuck built his four-story home out of concrete over stone, reinforced with steel railroad rails. On the ground floor, the walls are 18-inches thick!

The house was primarily built by Schuck and his five sons. His children hand-placed each tile, creating beautiful mosaics that each took weeks to complete. Because Schuck felt his dream home was never truly finished, his family never actually lived in the house they worked so hard to build.

Despite his bleak medical prognosis, Schuck went on to live for 40 more years, rather than the one predicted by doctors.

As Schuck didn’t anticipate living very long, he didn’t waste time with blueprints. In fact the blueprints of the Wonder House weren’t drafted until 1937, 11 years after construction of the house began.

The Wonder House was built in the shape of a cross, with each room opening up to two porches. If you lit the fireplace on the second floor, which is in the middle of the house, the hot air would rise, creating a cross-draft -– A/C of the 1920’s!

The porches were also designed to cool the house, as they were built with hollow concrete columns. Cold rain water from the roof ran through the inside of the walls, and could be turned on with a spigot to water the plants growing on the outside of the house.

Along with the unique architecture, another feature that fascinated tourists in the ‘30s was Schuck’s interesting collection of oddities. Schuck proudly displayed jarred snakes, taxidermy and even a coffin in the parlor! Keeping true to Schuck’s vision, the current owners have decorated the house with several unusual features, like the taxidermy deer and bug collection.

After many years of being vacant, the once vibrant home, fell into disrepair. Fortunately in 2015, a young couple fell in love with the undeniable charm of the Wonder House, and made it their mission to restore the estate to its former glory.  In fact, you can watch the restoration process on the Netflix Original show, Amazing Interiors.

Drew Davis and Krislin Kreis have worked tirelessly to restore and preserve the home, and in March 2019, their efforts paid off. The city of Bartow approved a zoning variance allowing the couple to open their home to paying guests on Fridays, Saturdays and Sundays.

With guided tours once again filling the 18-room home, this is an exciting time for visitors and locals alike to experience an important piece of Central Florida history.

When you visit the Wonder House, you’re treated like a guest, rather than some patron to a museum. You are welcome to sit on the furniture, and enjoy long conversations with the owners, while learning about this fascinating house.

Tours are available Friday at 7:00 p.m. and Saturday & Sunday at 10:00 a.m., Noon and 2:00 p.m. All tours must be scheduled in advance, via the Wonder House website, and tours typically last an hour and a half.

Parking for the tour is located in the rear of the property, accessible via El Paso Trail.

See more of what Central Florida has to offer.
Check out Wonder House .

This was our second time taking the tour of The Wonder House. The guide (owner) is passionate about the home’s history as well as the builder’s story. He brings it back to life during the tour as...

This historical gem features multiple engineering innovations that were designed decades before their time. The story that follows the creative designer/eccentric is fascinating. I’ve been waiting...

Wow, there's so much to see here, It really is a wonder. It was a very educational and entertaining afternoon. I recommend the drive to Bartow just to see this, it's worth it. Unfiltered in downtown Bartow is a coffee shop, bookstore, retail store and venue for workshops and classes. Polk Museum of Art is one of the top-ten art museums in Central Florida, featuring educational programs, diverse exhibits and…